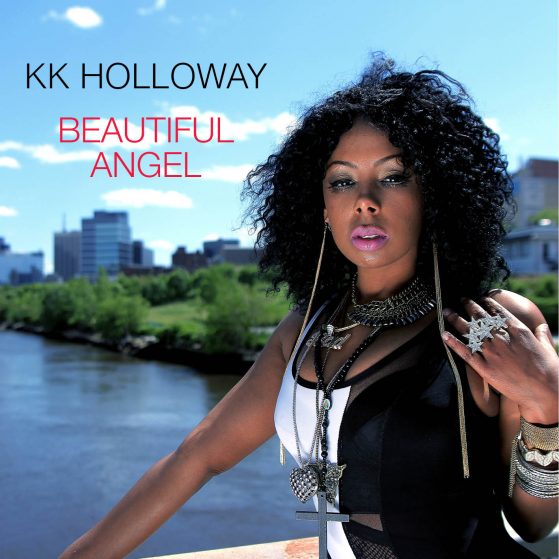 Beautiful Angel: Written by Karima K. Holloway and produced by Karima K. Holloway and James A. Natural Foster. Beautiful Angel is a classic R&B song that puts you in a relaxed state of mind. The inspiration behind the song is having a love in your life, and suddenly having the love almost disappear but time brings them back into your life. At the time of writing the song and recording it in the studio, I had learned that my father had suffered a major stroke that took me and my family by surprise and changed our lives completely. My father survived his stroke, and the song became more about the fear of losing my dad to his illness, but he became my living beautiful angel because he made it through and is still here with me. Beautiful Angel is for anyone who can relate to having a loved one or family member that they love so deeply and care for. It’s a song from the heart and soul that puts you at peace.

Karama Kareen Holloway aka “K.K Holloway” is a singer, songwriter, actress and model born May 22nd and raised by her parents, Robert “DJ Peanut” Holloway Jr. and Alfreda Holloway in Freehold, New Jersey (also the hometown of legendary singer/musician Bruce Springsteen). K.K is the youngest of four girls. She has always been surrounded by music from the time she was born mainly because of her dad being a former DJ. K.K. Holloway’s musical influences include Teena Marie, The Supremes, Etta James, Billy Holiday, Sarah Vaughn, Patti Labelle, Faith Evans and Mary J. Blige. At the age of 9 is when she first picked up the mic and began to sing and at the age of fifteen she formed an all girl R&B trio. A year passed and the group eventually broke up and she continued on her journey. At the age of 19 she quit her job and began modeling and acting on a full time basis. K.K. Holloway landed in the lead role in the classic independent film ‘DURDY GAME’ where she is reputably known by her fans as ‘CoCo’.

Her fan base has grown significantly from her roe in DURDY GAME. While continuing her acting career she always knew that music was her passion and made it her will to continue on with her music, but this time around her focus is being a solo artist. K.K. Holloway has developed a distinctive style of her own where she is considered to “step outside the box”. She is often labeled as “the black” Lady Gaga, and reminiscent of Michael Jackson. Musically she is developing a style true to her roots. She loves experimenting with different mixtures of hip hop, house, soul, r&b and pop. She continues to strive and push forward as she embarks on her lifetime dream. She’s true to the game and is serious about her “ish”. Her philosophy is to “follow your heart and soul and never give up. Keep God in your life and keep the faith.” k.K. Holloway exudes a charming and winning personality with sheer determination and a deep motivating drive to succeed.